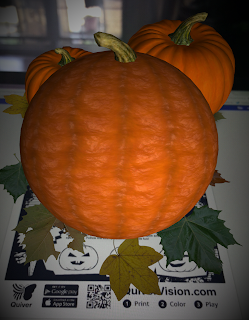 For the month of October I started challenging other educators in how many ways could they use Quiver's pumpkin page in their classroom.  I posted a few ideas that come to my mind such as having students write out step-by-step instructions in how to crave a Jack-o-Lantern and writing a spooky story with their pumpkin creature a character of the story.  After having some interesting conversations with other educators and reminding me that everyone do not always celebrate holidays or the same holidays.  This really made me think how can I include those students so that they can experience the augmented pumpkin.  It hit me, have students do a descriptive writing project and then record themselves describing the pumpkin using Quiver's video recorder.  There will be a creepy sound recorded, but I think it is only activated when you tap the screen.  You can always do a recording with no sound and pull that video into iMovie and then do a voice over recording within iMovie if you are worried about the creepy sound.

There are many ways of doing a descriptive writing of a pumpkin.  My thoughts are to have students write describing a pumpkin with of course not telling people what it is.  Using descriptors such as vertical creases running from the top of the object all the to the bottom, a hollow sound when you know on the object, etc...  Once students have written their descriptive paragraphs then I would activate the Quiver pumpkin and have students record via the Quiver app themselves describing the pumpkin.  I would then take their recordings and upload them to my Google Drive and create a QR code.  I would put the QR codes on their written out description with "Scan the QR Code for the Answer" posted on each writing project.

Another way would be to have students write a poem about a pumpkin or a pumpkin patch or even a riddle.  Then have students record and make a video clip using the Quiver app explaining their answer.  Save the video clips to an online folder such as Google Drive.  Then create a QR code for each video clip.  Past the QR codes on a bulletin board along with the students written out work. 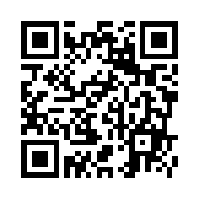 My friends and I hang out all summer playing in the dirt.
We start off very small.  So small sometimes you don't even see us.
Most of us are green with smooth skin but start to change after the being in summer sun.
By September and October we start to change.
Some of us become very short and fat while others get tall and just chubby.
Our skin starts to change color and some of us start to get bumpy.
What do you think we are?