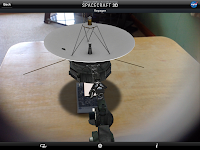 Explore space with NASA's Spacecraft 3D app.  It is an augmented reality app (a.k.a AR app) that lets students learn about a variety of spacecraft that are used to explore and study our solar system, the Earth, and even the universe. With a printed AR Target it looks like a pile of rocks and the camera on your iPad, tablet or smartphone your students can get up close with the amazing spacecraft.  Students can see how the spacecrafts move and learn about the engineering feats.

The App - Spacecraft 3D by NASA