4th of July Kupcakes for Kids 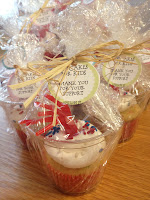 4th of July Kupcakes for Kids

My little elves have been very busy baking and decorating 4th of July Kupcake for Kids.  Kupcake for kids is a little fundraiser that Epsilon Pi is having to raise funds for school supplies.  Since I am one of the happy bakers and I know several people that couldn't make our Vendors Market on July 14th I offered to bake some cupcakes before the actual event with all proceeds going to the Kupcakes for Kids project.  Since it is almost the 4th of July I offered to make some 4th of July cupcakes. 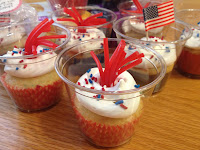 Before I decorated the cupcakes I placed each cupcake into a small clear pastic cup.