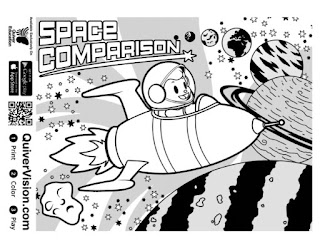 Augmented content is just another tool you can pull out of your teacher toolbox that brings student engagement to a whole new level.  For STEAM the letter "S" is supposed to stand for science, so  I thought how fun it would be to have a space STEAM unit.  As a teacher I would use the Quiver Space Comparison coloring sheet to introduce the unit.  Since I am into Augmented Student Interactive Notebooks I would print the coloring sheet as either a 4x6 or 5x7 size that could be easily attached to a page in the notebooks. I would also have writing prompts posted in an LMS, on Bulletin Board. whiteboard, etc...

For the STEAM activity I would have students design using grid paper a space travel machine. Students would have to give me different views of their machine along with scaled measurements and keep their sketches in their Augmented Student Interactive Notebook.  I would have them next build their space travel machine from recycle materials. For me their machine would also have to move on its own, others could be just the design and build and extra points if it moves.

You could also have students create balloon rockets and have them collect data on which rockets went the furthest, cared the most payload, and etc...


I would focus more on the the writing prompt if "you where a space explorer".  I would then have students use Quiver's Flag coloring sheet and design their flag that they would put on the planets, moons, and etc... that they discovered and wanted to stake claim to. 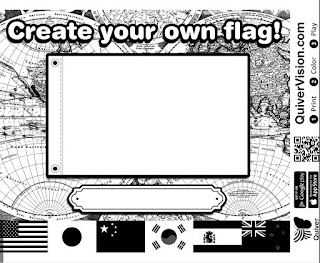 You can also tie a global connection with the flags and have students do a little research on other countries flags.  Again I would print this coloring sheet to a 4x6 or 5x7 size and have my students add it to their notebooks along with their research of other flags.

I would then use other augmented content for my students to explore space.  Such as apps that focus on astronomy like the Star Walk app.  Other AR companies like sAReddy have an augmented book on Planets called Planets 4D.  Octagon Studies has augmented space flashcards. While PopARToys has an interactive 3D Solar System poster.  All of these augmented tools would be a great addition to a SPACE STEAM unit.

To learn more about ways you can use augmented reality in education join us on Thursdays at 8pm central for the Twitter chat #AR4Learning. 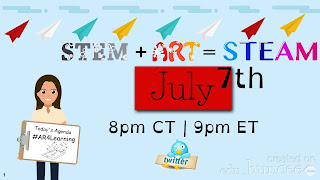