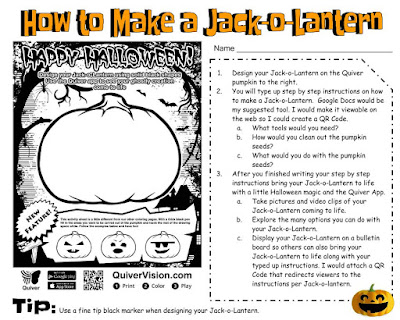 When I was growing up I had to learn how to write out step by step instructions.  The best way my teacher had us learn was to write out the process in making a peanut butter and jelly sandwich.  During the demonstration the person following our instructions could not do anything unless we said it and we couldn't say anything unless we wrote it out.  By the end you knew you where successful if the person following your instructions made a successful peanut butter and jelly sandwich.

If your class was doing a science or math experiment say in comparing a small pumpkin to a larger one and which one would have more seeds you could incorporate it into this augmented activity.  Better yet add it to your interactive student notebook.  While they are writing out their instructions you could have them include how many seeds they think would be in their pumpkin.  As a class you can then do ratio of seeds to pumpkins.  You could make a chart of the different shapes used when creating the Jack-o-Lanterns, how many Jack-o-Lanterns have teeth, sunglasses, etc..


Join us every Thursday at 8pm central on Twitter for #AR4Learning to learn more ways to use augmented reality in the classroom.