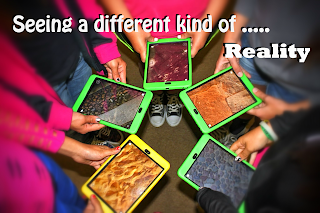 Augmented reality in a STEM curriculum will transform how students learn. STEM stands for science, technology, engineering, and mathematics.  The approach of STEM is to teach these disciplines as a whole to be applied in real life applications instead as separate entities.  When you add augmented reality or better known as AR into the mix as a tool you literally open your classroom to endless possibilities.  Augmented reality in education is on the forefront of transforming how we teach and learn.

AR can transport you into environments from around the world, bring 3 dimensional objects to life, and best of all AR will transform how you see and interact with the world.  To make AR work you need a trigger, or trigger image.  The augmented reality app looks for defined lines and contrast, kind of like a QR code.  When the design has been recognized by the app it triggers the augmented experience, thus calling it an AR trigger.

Corporate business have seen the power of using augmented triggers in their marketing campaigns. According to Digi-Capital the impact of augmented reality is on the forefront and has forecasts that by 2020 augmented reality will be a $120 billion industry.  An example of augmented reality being used could be a lumber yard or a truss company using an app called Sapphire Viewer by MiTek that allows you to interact with a virtual 3 dimensional building.  You scan the blueprint of the building and can literally measure the support beams, inner walls, and even see all the way down to the studs.  What a powerful tool for teaching math, design, and architecture.  IKEA has an app that provides augmented reality to give a virtual preview for a room design.  Using this app can help with teaching math concepts such as dimensions and perimeter, as well as design and economics.

Companies see the endless possibilities, and the powerfully impact augmented reality can have in education which is why in the next four years we will see a huge growth in incorporating AR into the classroom.  Companies have started making mind blowing triggers, so when scanned with their app you receive a superimposed computer generated experience or a virtual world.  The only problem I can see is that they have not yet successfully implemented a curriculum.  It feels like they have gotten the cart before the horse.  They have the tools but are lacking the educational content.

Augmented reality is a powerful learning tool that we need to start using in our classrooms especially in our STEM and STEAM classrooms.  The CEO Adam Newman of Aug That has seen the impact augmented reality has in education and has developed not only a platform for augmented reality but a community for educators called Teach Connect.  With Aug That you have access to pre-made animated lessons to reinforce concepts being taught in the classroom, as well as to 3 dimensional objects, and powerful 360° environments.  Students can literally hold the world in their hands or design their own worlds. With Teach Connect teachers and students can share their augmented lessons, 3D objects and 360° environments.  You do not need to be a computer guru to have personal augmented lessons.  You just send your trigger image and content to the Teach Connect people of Aug That and they will put it all together for you.  As this company grows so will their educational content and curriculum as well as their Teach Connect community.

An example of a STEM / STEAM lesson that involves augmented reality could be an animal adaptation project.  Teachers set the stage for this project by having students scan a 360° environment which will immerse them into the environment, then the students research the animals that could possibly live in that environment.  Students will then analyze the ways animals adapt to their habitats in order to survive, catch food more effectively, care for their offspring, and keep safe from their predators.  Once the research is completed students will design their own animal using 3D software such as Tinkercad.  They then could build a diorama to scale of the habitat including augmented triggers.  One of the triggers could be a 360° environment of the habitat and of the animal that the student based their creations from.  While another trigger would be the 3D model of the animal the student created.  Yet another trigger could be an interactive presentation or even a video of the student explaining the animal, the habitat and the adaptations the animal had to go through in order to survive in this habitat.

When the creation of the Animal Adaptation project is completed you then could have students interacting and comparing the different environments and animals.
Discussion questions could be along the lines of:
All of this started with beginning emerged in an 360° augmented reality environment.

I foresee augmented reality being a tool used in classrooms such as paper, pencil, a ruler, or even an iPad.  Over 25 years ago the so called educational experts said computer technology was just a fad, now look at how far we have come.  The first computers were the size of gymnasiums and were only found at universities.  Now our cell phones have more memory and processing speed than the experts could even imagine 25 years ago.  We are teaching, training, and preparing our students for jobs that haven’t been invented yet, so why not use the tools they will be using to prepare them for their future?  We need to teach science, technology, engineering, mathematics, art, and reading as a whole not separate entities, while using tools such as augmented reality to give our students a meaningful learning experience.  There is no limit to a child’s imagination, so lets give them wings, foster their growth as they zoom into the future with the help of augmented reality.