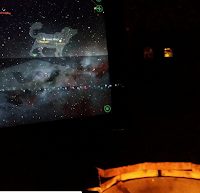 I use these tools at home with my own kids.  We love to sit around the backyard fire pit star gazing via Star Walk.  How powerful can it be to turn your classroom in to observatory with a simple augmented reality app.  Use augmented 3D models of the planets, or transform your classroom to one of NASA's launch platforms.

With the unit Exploring Space I've paired up my favorite augmented reality apps together.  I've included Quiver's Moon phases, Chromville's solar system color sheet and their The Spatial Hitchhiker.  The color sheet works with Chromville's Science app which is currently available for Android devices, the iOS version will be out very soon.  The Spatial Hitchhiker can be used as a journal or a creative writing project.  With the launch of Chromville's World they also launched several educational resources.  You do need to be a member in order to download the additional content.  Chromville has activities for Living Things, Earth, and the Human Body.  They just added a Thanksgiving "I'm Thankful" ChromTurkey, which looks really cute.  I did ask and Chromville will have an activity for Christmas as well.  Quiver also has some new science pages come out soon.

The education team at Blippar has also developed a Solar System trigger which I've included in the unit. I've even included a trigger I created to go along with this unit called Your Weight on Other Worlds.  At the end of the unit I've even included the standards.