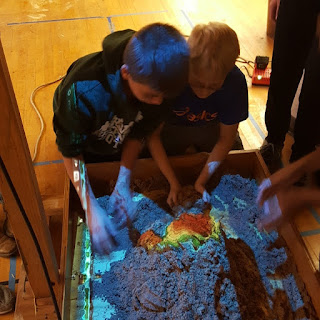 I learned abut the AR sandbox almost 2 years ago and finally in May of this year I got to see it in action.  For my son's senior project he set up an AR sandbox for the high school.  The original Sandbox prototype was designed and built by project specialist Peter Gold of the UC Davis Department of Geology. The driving software is based on the Vrui VR development toolkit and the Kinect 3D video processing framework, and is available for download under the GNU General Public License.  Using this software, a Linux based computer, a short throw projector, and a Kinect 3D scanner he was able to make the AR Sandbox a reality.

My STEM students were one of the 1st group of students to tryout the AR Sandbox.  Let me tell you they fell in love instantly.  As they were busy building different land-forms my teacher mind was jumping up and down.  What a great way to visually see a topographical map.  My students that have to get all hands on deck building the different elevations would love it.  My students that are visual learners would also love seeing the elevations form.  My 1st thought was what if I gave two groups of students two different printouts of a topographical area and have them build them next to each other in the sandbox.  They then compare how they were able to build a certain elevation. They also can compare how different and or similar their two elevations are.

My mind then went to having my students build different mountain ranges and compare their elevations.  I would then have them discuss the weather on the mountain rages, the animals, and the foliage and why some mountains tops do not grow any kind of vegetation.  Talk about seeing the world from a different perspective.

Join us on June 2nd 8pm central as I share how you can create your own AR sandbox among other fun augmented tools you can use with your students. 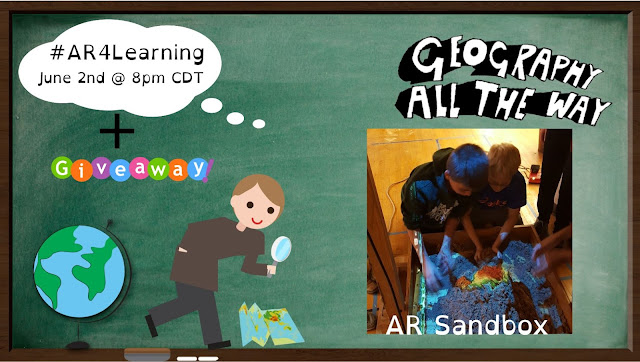